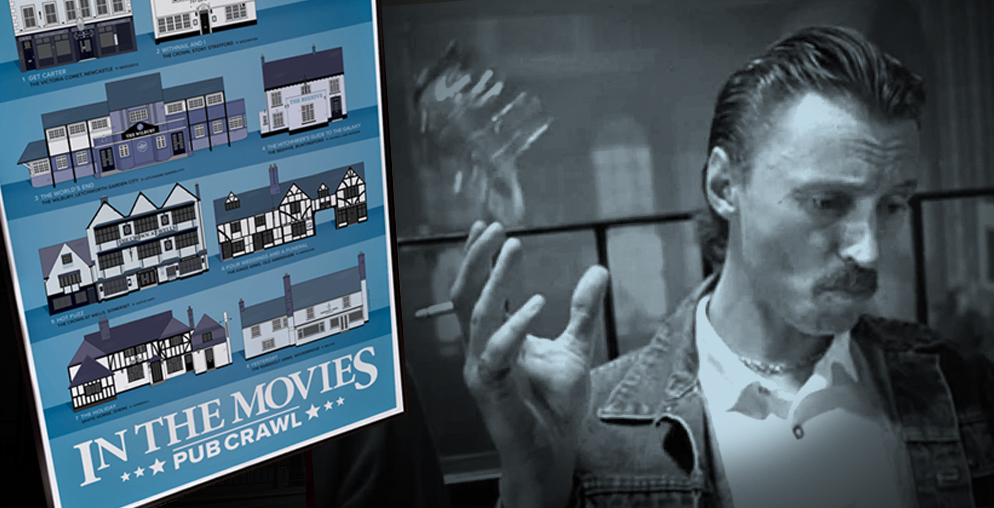 When embarking on a new poster design it takes loads of research. In the case of Pubs In Movies, it was important to me that they had to be real pubs, with the exterior seen in the movie, and that you can still go and drink at.

It was amazing to find how many pubs had closed down (it was a lot), when researching this poster, or the outside didn’t match the inside, or match the location of the film etc.

The ‘Long Bar’ (North Eastern Bar) featured in Get Carter in Newcastle has now been converted into a modern block.

1964 documentary Portrait of Queenie set in an East End Pub in Bromley was supposedly the inspiration for Angie and Den in Eastenders. Now demolished.

The Leaky Cauldron pub in Harry Potter featured a real outside, but unfortunately not a real pub. It was just a small entrance at Leadenhall market in London made to look like a pub.

There’s been at least a couple of movies about the notorious east end Kray Twin gangsters – but the most famous pub, The Blind Beggar, never itself featured in any of the films. The pub that stood in for it in The Krays movie in 1990, in Hoxton, London, is now a boarded-up restaurant.

Trainspotting never actually featured the outside of a pub (and it was in Scotland of course). It’s no longer a pub, and now a trendy restaurant.

An American Werewolf in London, some of which was set in Yorkshire, had a famous pub, but the outside was filmed in The Lake District and it’s not a pub.

Perhaps the best-known films featuring pubs are in the so-called Cornetto Trilogy. The distinctive curved Winchester Tavern (Duke of Albany in real life) had a starring role in Shaun Of The Dead – it’s been converted into flats, and the curved part has been demolished altogether. Such a shame…

So, all that said – the final 8 pubs from around England, featured on the poster, had a starring role and are still operating. A rare thing, and something to be celebrated. If you buy this, we’ll move on to the London movie poster next.